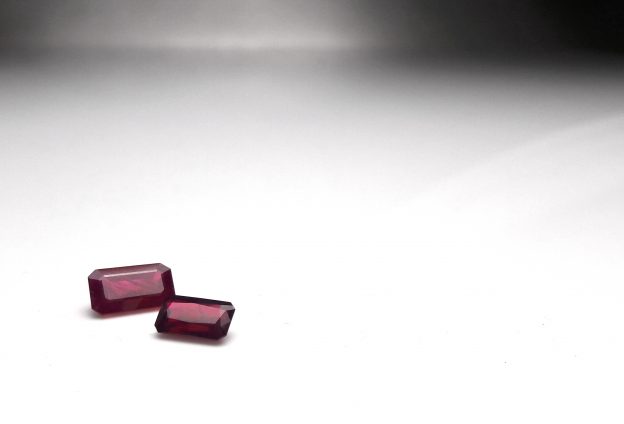 In a new series of blogs I’m going to discuss coloured stone choices – focusing on different colours; red, green, blue and the remaining tonal rainbow. The sheer variety of coloured stones on the market can be disorientating but setting your mind towards a certain hue or style can make selecting something perfect for you much easier.

As the Ruby is the birthstone for July I thought it appropriate to begin the series with red stones: 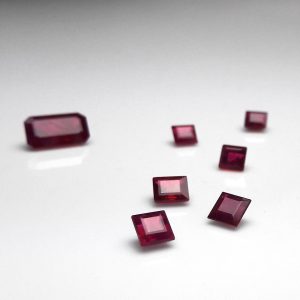 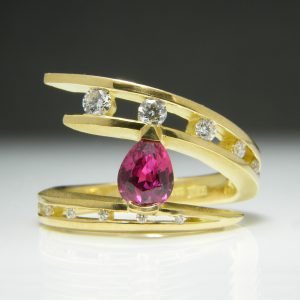 Within the world of gemstones a ruby is considered the archetypal red stone. A variety of the corundum mineral, family they are second only in hardness to diamonds and moissanite. Rubies have been considered valuable for centuries. In the Bible Proverbs 31:10 extols that “a wife of noble character is worth more than rubies”, which is quite a price indeed. The most valuable ruby sold at auction to date is the 25.59 carat Sunrise Ruby, reckoned to be the most perfect yet discovered. In 2015 it fetched 30.42 million dollars during a sale in Geneva.

Rubies vary in colour from the delicate pinks of Burmese rubies through to the deep, rich, pigeons blood red. The more purely red a ruby is, without undue influences of purple or brown, the more collectable it becomes. Some stones are also subjected to heat treatment, dying or filling to enhance the colour and to fill cracks or fissures in the stones. Untreated, more perfect rubies are generally considered to be more valuable. However it is common (and sometimes seen as a sign of a truly untreated state) to see inclusions or ‘silk’ markings within a ruby. These are simply the natural crystal structure of the stone which is visible to the naked eye.

The term ‘Burmese Ruby’ has become synonymous with quality over the years though, in reality, Burma (or modern day Myanmar) produces rubies in many different shades and qualities. The main mining centres for rubies are still Myanmar, Sri Lanka, India & Pakistan along with Cambodia and Tanzania. 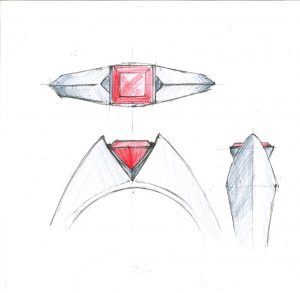 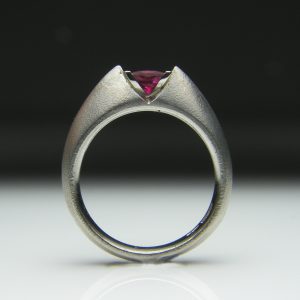 When sourcing rubies I look for a good combination of colour, clarity and cut – weighing the balance of properties in each stone to suit the particular piece for which it is intended. When matched with yellow gold rubies can look extraordinarily rich and deeply coloured while setting them in white metals, like platinum, has a cooler, more contemporary look.

Rubies long historical association with love and passion makes them ideal romantic gifts, including for your Valentine or when celebrating a 40th Wedding Anniversary. The diamonds in this Shooting Star Ring emphasise the colour of the ruby through contrast, bringing out the velvety, rich tones of red. 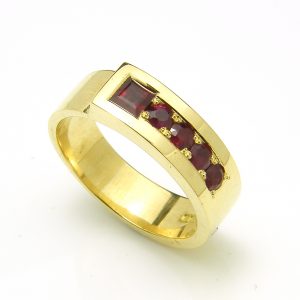 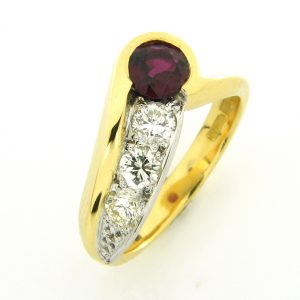 Some other red hued stones which I’m particularly fond of working with are tourmalines, garnets and red spinels. Tourmalines originally hailed from Sri-Lanka (or Ceylon) though since the 1500’s rich, green strains have been mined in Brazil. Pinky-red or Rubellite tourmalines are more generally from Sri Lanka, Burma, India, Madagascar, Kenya and Nigeria. Particularly fine pink tourmalines are also mined in California.

Tourmalines are also particularly hard stones, ideal for everyday wear and, unlike rubies are rarely included or internally flawed. Their bright, clear centres are part of their attraction as are the strong, juicy colours which bring a bright freshness to most pieces. They are regularly cut in a larger variety of shapes and styles than rubies, making them ideal for contemporary designs where you seek to produce something more modern.

I find that pink tourmalines contrast particularly well with the other colours within the tourmaline spectrum; green and blue to purple and grey. Indeed they also sit nicely alongside other gems like the green emeralds in this Flare ring: 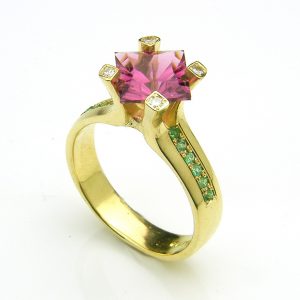 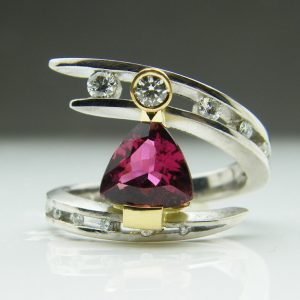 Red Spinels were not classified as distinct from rubies until 1783 when mineralogist Jean Baptiste Louis Rome de Lisle recognised them as a separate mineral group. The famous Black Prince Ruby which sits within the Crown Jewels is actually a Red Spinel, not an unusual mistake as many red gemstones were, historically, referred to as ‘balas rubies’. The gem is currently the largest uncut spinel known to be in existence and is not faceted but only lightly polished.

The real joy of red spinels is the vibrancy of their colour, meaning that they can be cut into very small stones and still show red highlights. The small, round spinels in this amethyst pendant are only 1.5mm in diameter yet form a clear, bright red line along the top of the larger gem. 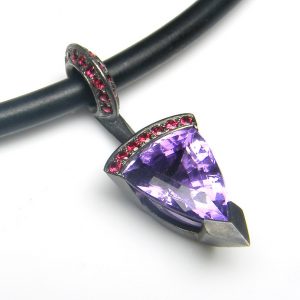 Garnets are found naturally in a wide variety of colours, from bright, mandarin oranges to acid greens. However, the very name ‘garnet’ derives from the latin phrase ‘malum granatum’ which refers to the red garnets resemblance to pomegranate seeds.

Since Anglo Saxon times, and possibly before, garnets have been shaped and used by people to decorate precious items. Pieces found in the Staffordshire Hoard are made from slices of garnet, laid into a lattice of finely wrought gold. The enduring popularity of their deep, red colour means that garnets in all their forms are  still widely used today.

Rhodalite Garnet is a particular favourite of mine, it’s more usual violet-red shade is livelier than the traditional red and it contrasts beautifully with yellow gold. 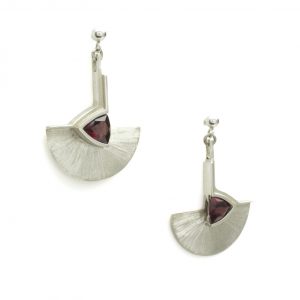 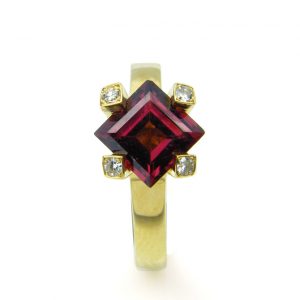 There are other bright pink hued stones which I will cover in this series, along with examples of blues, greens and other rainbow tones. Look out for the next blog, inspired by Septembers birthstone, the Sapphire.

Back to Stories and Events